News & Updates: Check out our blog!

In 2018 Share the Road launched a blog on Medium. Follow our blog for press releases, updates on our provincial work and articles on cycling safety across Ontario: https://medium.com/share-the-road-cycling-coalition

The most recent application round for the Bicycle Friendly Communities (BFC) Program saw the Town of Essex, Norfolk County and The Town of Saugeen Shores all become Bronze level BFCs, bringing the total number of BFCs in Ontario to 44. The City of Hamilton and the City of Guelph both renewed their Silver BFC Designations, while The Town of Halton Hills and the City of St. Catherine's both renewed their status at the Bronze level.  The City of Brantford and Haliburton County received Honourable Mentions for their submissions. Click here for the full press release.

You may have seen that the Financial Post is publishing a 4 part series on bicycling written by Lawrence Solomon. The piece published on January 2 was titled "Rip out the bike lanes - before more innocent people get hurt". We felt compelled to respond, and an abbreviated version of our response was published as a comment in the print version of the National Post on Saturday, January 13. We invite you to read our full response online here.

The most recent application round for the Bicycle Friendly Communities (BFC) Program saw the City of Greater Sudbury earn a Bronze Award, making it Ontario's 40th BFC. The Town of Ajax received a Silver award, an upgrade from the Town's previous Bronze designation. In addition, the City of Thorold renewed it's Bronze and the City of Ottawa renewed its Gold status as one of Ontario's leading bicycle friendly communities. The Town of Lincoln and the Town of Saugeen Shores received Honourable Mentions. Click here for the full press release.

This year, Ontario will be investing $93 million in cycling infrastructure in 120 communities across the province. This represents a doubling of the initial investment of $42.5 million, announced earlier this year. Share the Road applauds the government for this record investment. Click here to view our full release, and click her for a list of recipient communities. 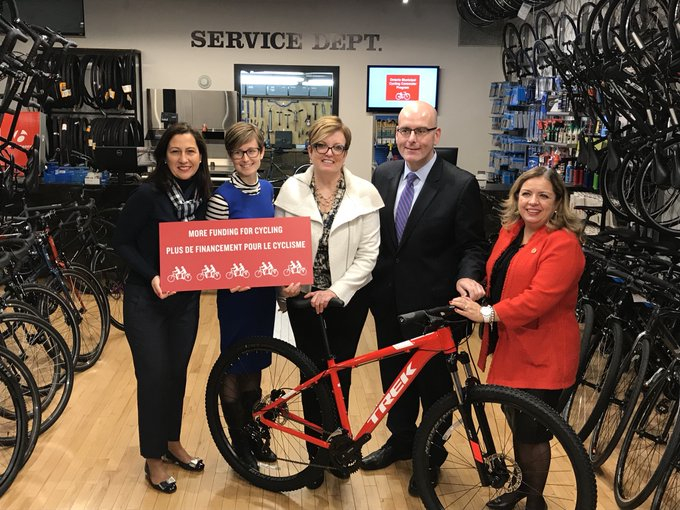 Share the Road was in Toronto this morning as the Province introduced plans for tougher legislation around careless and distracted driving. A new charge of careless driving cause death would see fines of up to $50,000, up to two years in jail and license suspensions of up to 5 years imposed on drivers. Click here to read our full release and click here to read the provincial release.

After 11 years of hosting our Annual Greg's Ride in Milton, we have decided to move the event to Hamilton. This move will allow us to take advantage of generous local partnerships with Cycle Hamilton, Grupetto, Shawn & Ed Brewing Company, etc and provide participants with urban and rural ride routes. Click here to read the full release.

Ontario is investing approximately $2.5 million in bike parking at GO Transit Stations. This will include 120 bike lockers and 28 secure bike parking rooms across the region to help people commute by bike. Click here to check out Share the Road's map of planned bike parking facilities, and click here to read the full release. 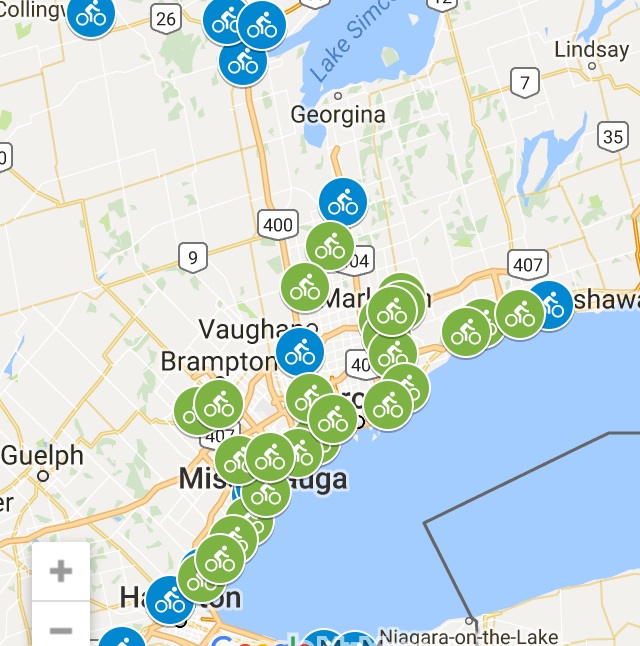 Ontario is investing in new and expanded well-being programs for students across Ontario. This investment includes funding for active transportation, including walking school buses and biking to school programs that create more physical activity opportunities for students. Click here to read the full media release.

Driver partners and riders in Toronto and Ottawa will receive vital information to help prevent collisions, like remembering to keep bike lanes clear and watching for bicyclists when they open car doors into traffic. New information on cycle safety will be featured in the driver app each week. Read more in the media release here.

Share the Road was at Queen's Park today for the release of the 2017 Budget, which includes $50 million for commuter ccling infrastructure. Read more in our media release here.

Share the Road recognized Ontario's newest Bicycle Friendly Communities at the 2017 Ontario Bike Summit. Bronze award recipients include the City of Belleville, the City of Brampton, the Town of Ingersoll, the City of St. Thomas and the Town of Whitby. Click here to view the full release. 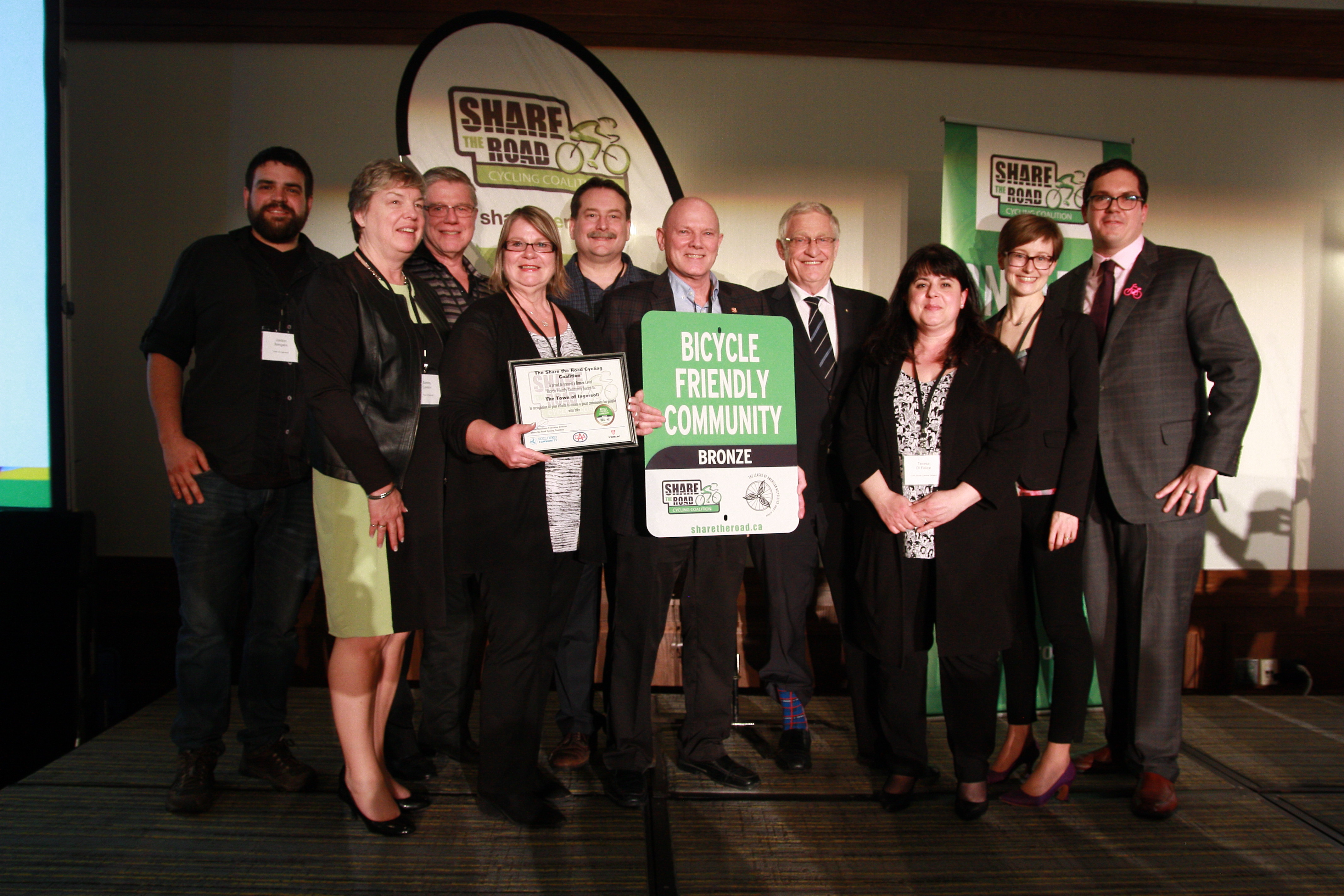 March 6, 2017: We're Calling for a $50 million investment in cycling infrastructure

Together with the Waterfront Regeneration Trust, Ontario by Bike and the Greenbelt Foundation, the Share the Road Cycling Coalition is calling on the province to continue to invest in building safe spaces to ride a bike. Click here to view the full release.

Award recipients will be recognized at an awards ceremony during the 9th Annual Ontario Bike Summit (April 11 & 12, 2017 in Toronto). Click here to view our media release.

Today, the Government of Ontario took an important step towards the goal of seeing Ontario recognized as the best Canadian province for cycling.

The Climate Change Action Plan was launched at a press conference this morning and includes plans to invest $150 - $225 million in cycling infrastructure. A PDF copy of the full Plan is available online here, with specifics about cycling on pages 22 and 63.

The Plan outlines commitments to improving commuter cycling networks, accelerating the implementation of Ontario's Cycling Strategy and building grade-separated cycling facilities. This commitment to cycling has the potential to be truly transformational and to bolster individual, municipal and provincial efforts to fight climate change.

At the 8th Annual Ontario Bike Summit this Spring, the Share the Road Cycling Coalition and Cycle Toronto urged the province to leverage the cap & trade program to invest $200 million in cycling infrastructure over the next 4 years. A copy of our letter can be viewed here. We made this request because building safe spaces for people to cycle can have a huge impact on reducing greenhouse gas emissions, especially when people hop on their bikes for trips under 5km. We also know that there is a pent up demand for cycling in Ontario and a need to provide residents with meaningful transportation choices.

Share the Road is pleased to see a clear commitment to cycling in the Climate Change Action Plan and we would like to thank all individuals and organizations that submitted letters of support for our ask for a $200 million investment. We look forward to working with our partners and the province to ensure that this investment is rolled out to the maximum benefit of municipalities across Ontario. 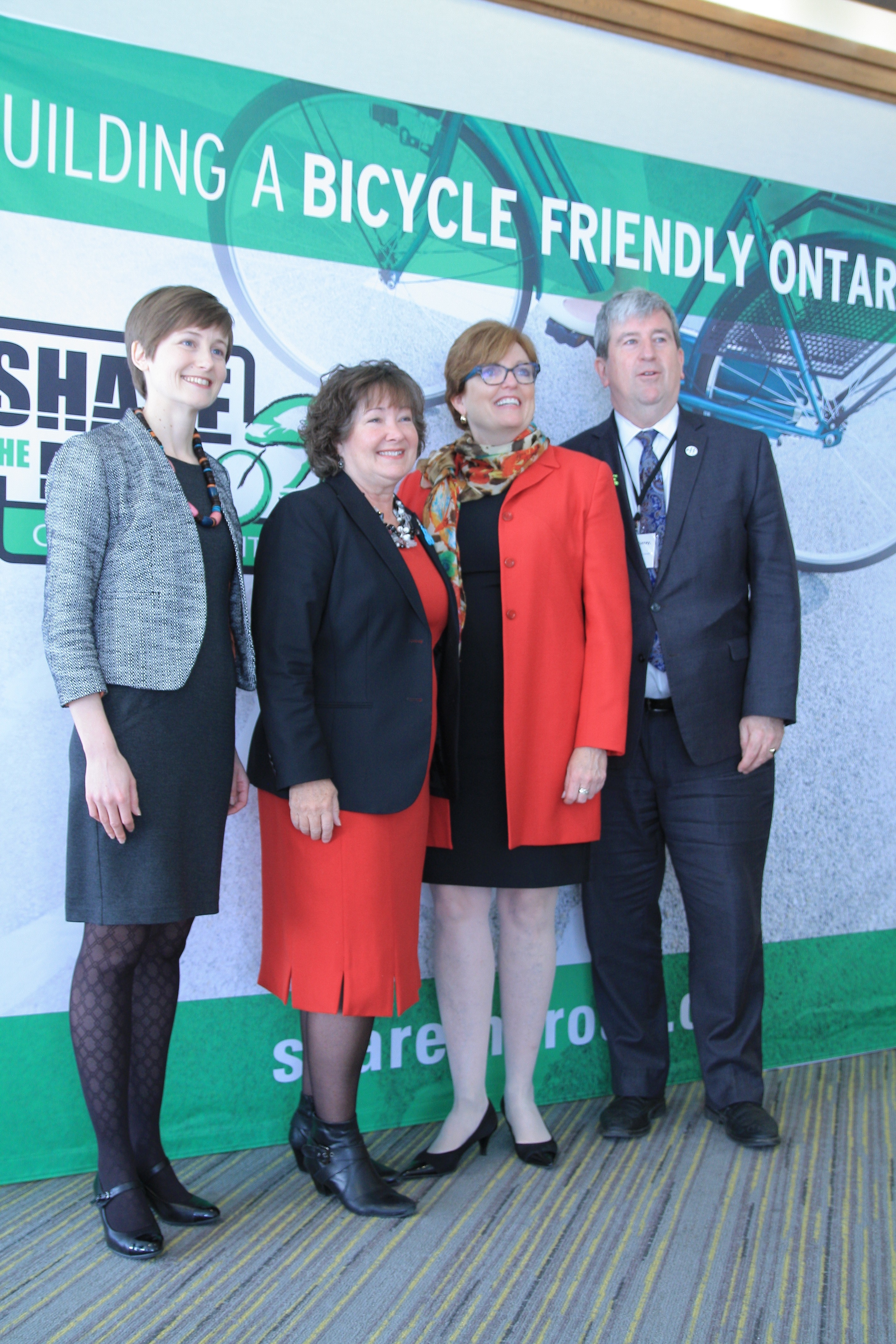 A look at what is happening in Windsor to encourage cycling and next steps as part of the first Windsor Bike Summit. The event was hosted by Bike Windsor-Essex.

May 23, 2016: Building community through bike-friendly planning

A profile of 5 of Ontario's bicycle-friendly communities by Dandyhorse Magazine.

A short summary of Share the Road's workshop with Huron County stakeholders.

A re-cap of the 8th Annual Ontario Bike Summit by Dandyhorse Magazine.

At the 8th Annual Ontario Bike Summit, Share the Road, in partnership with Cycle Toronto, called on the provincial government to leverage the cap and trade program to provide $200 million for cycling infrastructure funding over 4 years. We wrote to the Honourable Glen Murray, Minister of Environment and Climate Change and the Honourable Steven Del Duca, Minister of Transportation because cycling can play an important role in reducing greenhouse gas emissions and meeting our climate change goals, while also providing meaningful transportation choice to Ontario residents. Both Minister Murray and Kathryn McGarry, the Parliamentary Assistant to the Minister of Transportation, joined us for the summit's keynote breakfast.

We encourage you to join Share the Road and Cycle Toronto and write a letter of your own letting the province know that you support this ask and commitment to providing safer, more connected spaces to cycle. Write your letter to Minister Murray and the Queen's Park All Party Cycling Caucus:

At the 8th Annual Ontario Bike Summit, Share the Road announced the latest Bicycle Friendly Community awards for Ontario. The following communities were awarded Bicycle Friendly status: Burlington - Silver (moved up from Bronze), Niagara Falls - Bronze (new in 2016) and Mississippi Mills - Bronze (new in 2016). Oakville, Oshawa, Richmond Hill and Welland were renewed at their Bronze designation levels, while Hamilton was renewed with a Silver designation. An Honourable Mention was given to North Bay. 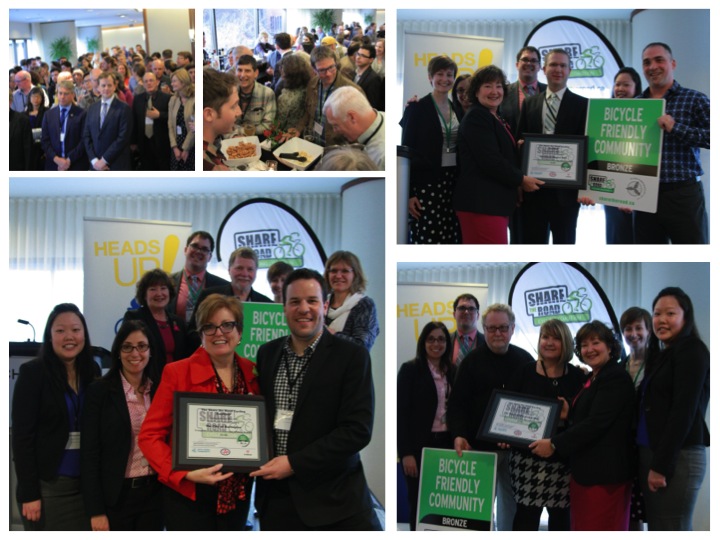 On Tuesday, November 17th, 2015 Share the Road recognized Ontario's first recipients of the Bicycle Friendly Business Awards. With the generous support from our partners at The City of Hamilton, The City of Thunder Bay, EnviroCentre, BikeBrampton and Evergreen's We Are Cities Community Innovation Grant, we are pleased to bring the BFB Program, which was developed and proven successful by the League of American Bicyclists, into Canada.

Highlights of the first round of award winners includes:

The province has created a new streamines process for municipalities to submit proposals for environmental assessments on new paths and trails. The new process will be easier and quicker, saving municipalities considerable time, money and effort.

The amendments were proposed by the Municipal Engineers Association and received significant public feedbacl during the province's public consultation. The new environmental assessment process also supports CycleON, the province's long-term strategy to help make Ontario the number one province for cycling in Canada. 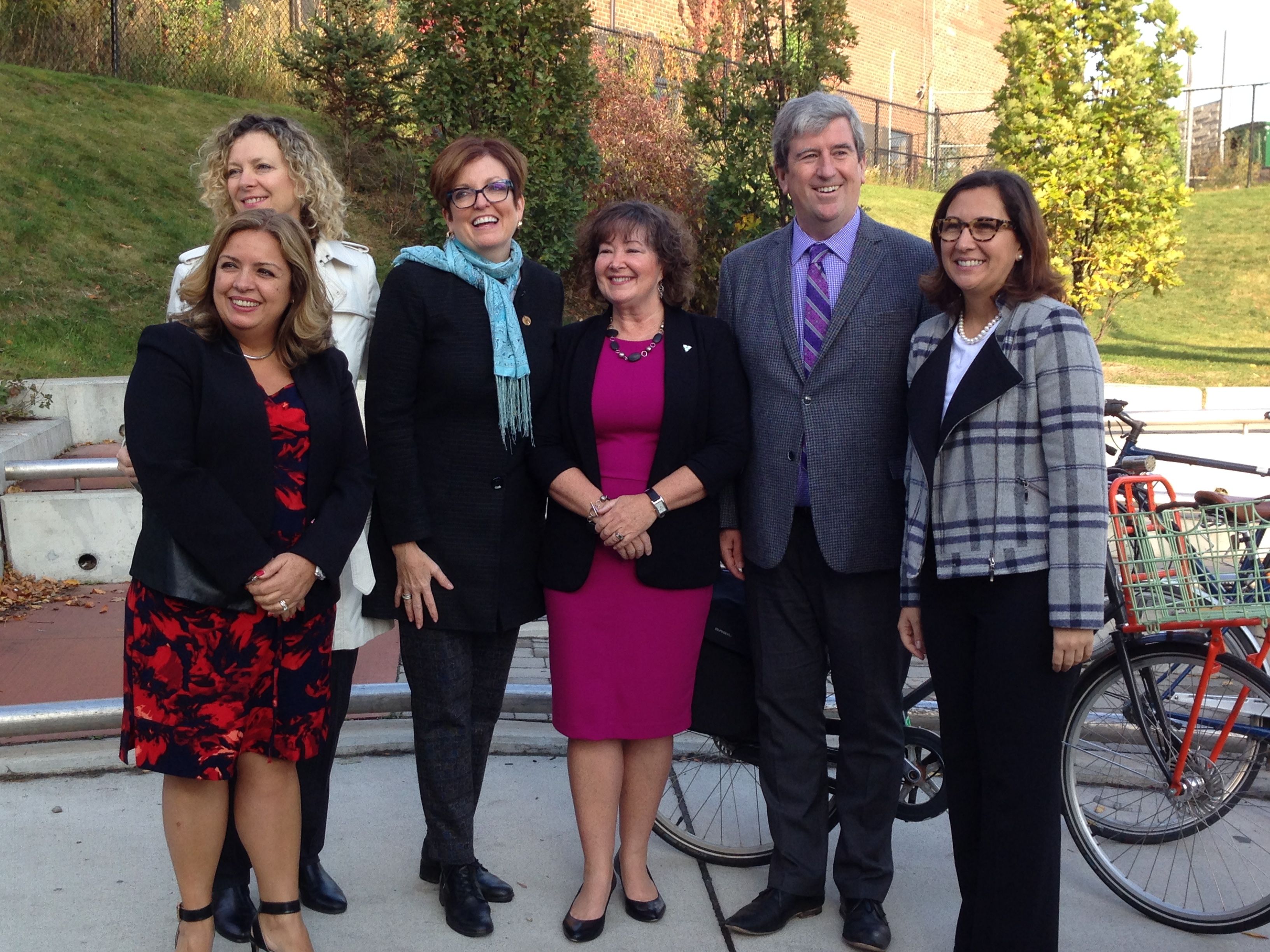 On Friday, July 3, The Parliamentary Assistant to the Minister of Transportation, MPP Kathryn McGarry announced the opening of the application period for both the $10 Million Municipal Cycling Infrastructure Fund and the $380,000 Cycling Skills Training fund. Share the Road has been advocating for dedicated provincial funding to assist municipalities in building safer cycling facilities since releasing our 2009 Green Paper entitled When Ontario Bikes, Ontario Benefits, and we are extremely pleased to see both of these new pools of funding made available to improve the safety of Ontario's roads for all road users.  See our press release here. 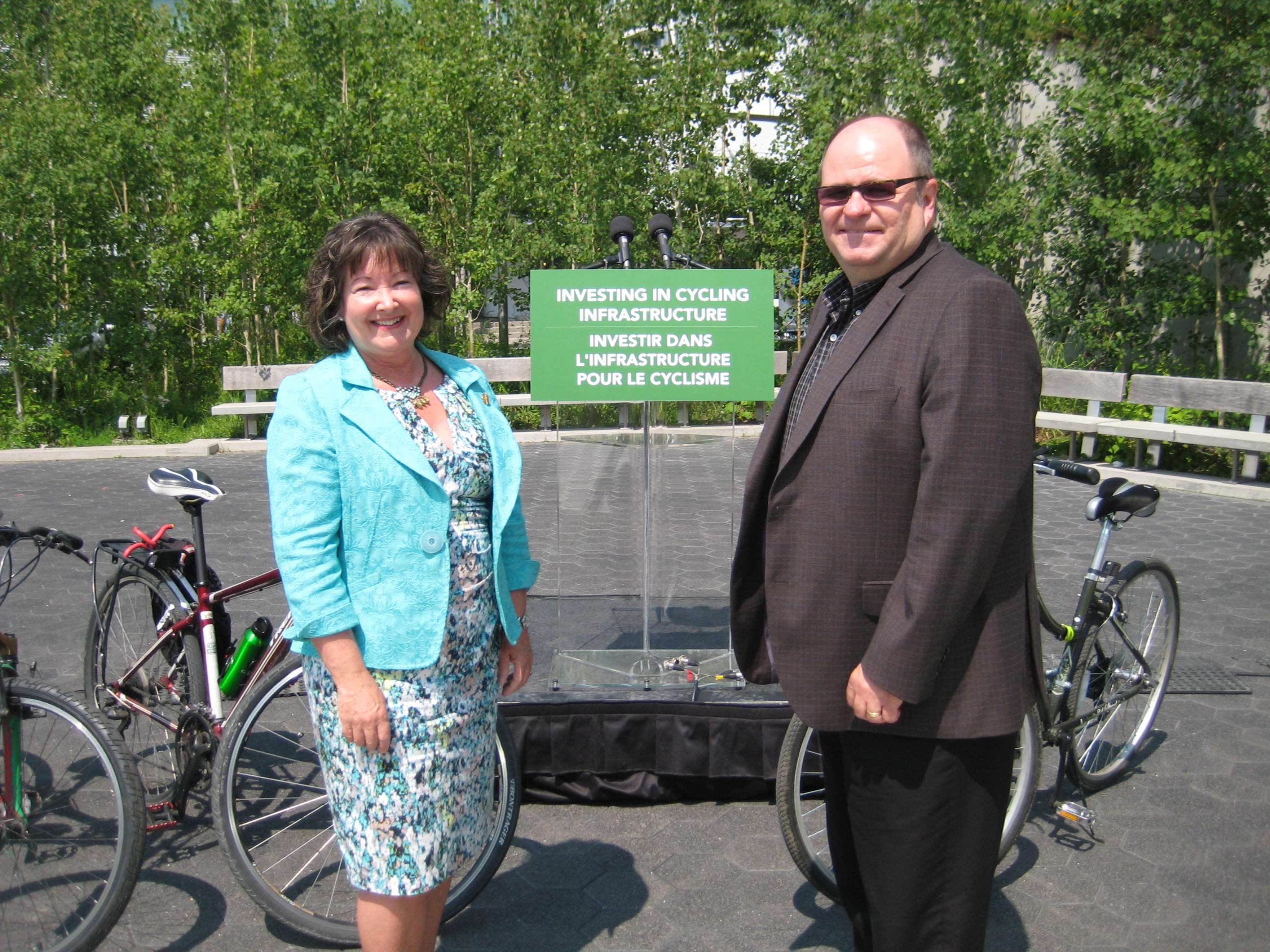 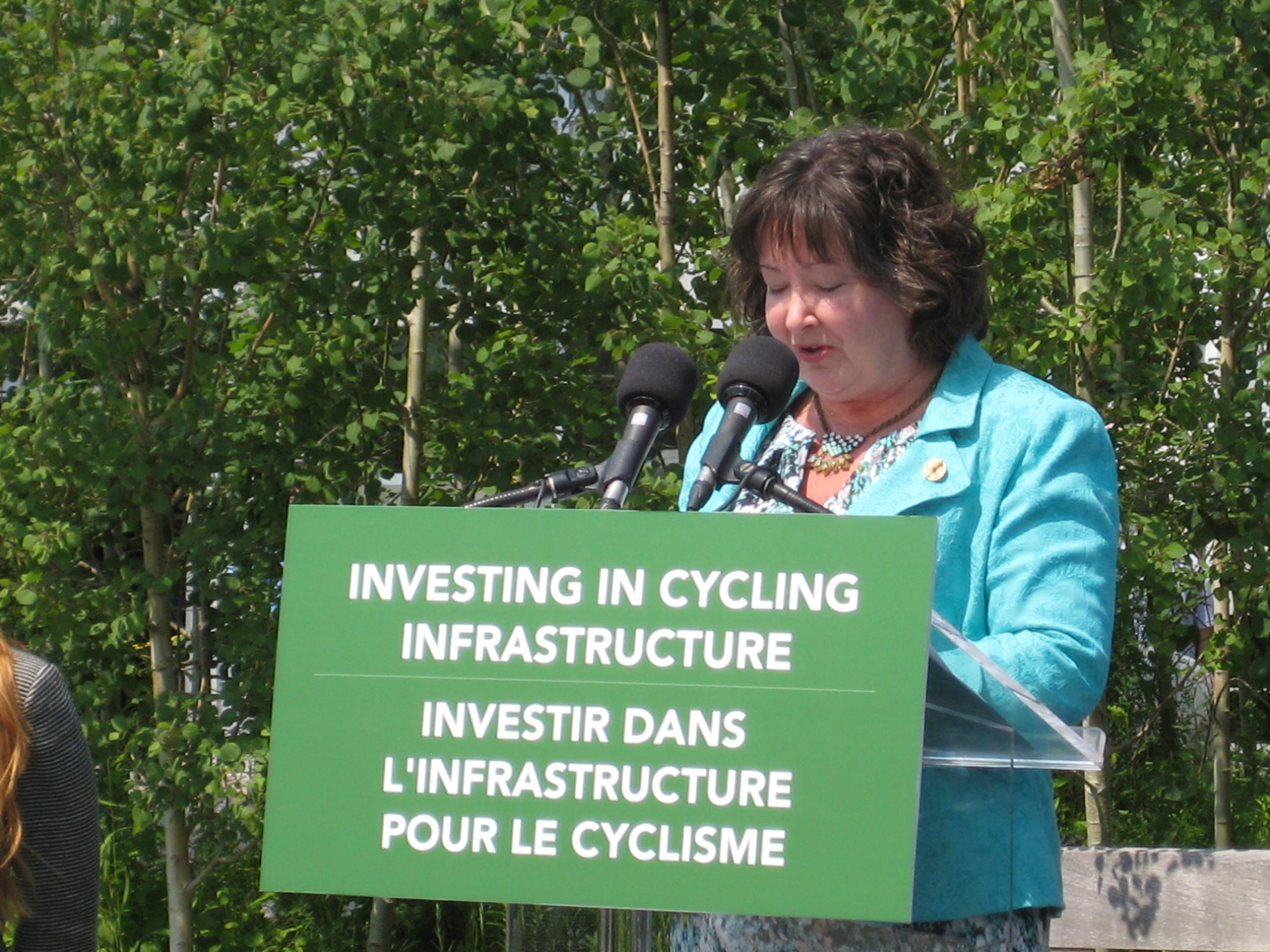 On Tuesday, June 2, The Making Ontario's Roads Safer Act (Bill 31) was unanimously passed at Queen's Park. This modernization to the Highway Traffic Act includes provisions that will make Ontario's roads safer for all road users, including people on bikes.

For more information on Bill 31, visit the Legislative Assembly of Ontario's website.

Share the Road was in Ottawa this week for the launch of our Stay Safe, StayBack campaign. This bilingual campaign includes a video, website, bus-back ads and truck decals. Stay Safe, Stay Backwas developed by Share the Road in partnership with the Canadian Automobile Association and Top Drawer Creative Inc. with translation to French by the City of Ottawa. The objetive of the campaign is to educate both truck drivers and people who bike on the best ways to safely share the road. Specifically, the campaign materials highlight the "no go zone" where people on bikes are invisible to drivers and urges drivers to give cyclists space at intersections.

We were joined in Ottawa for the launch event by Mayor Watson, Ottawa City Councillors, the National Capital Heavy Construction Association, the Canadian Automobile Association and Citizens for Safe Cycling.

Ottawa is the second municipality to adopt the Stay Safe, Stay Backcampaign in Ontario (after Toronto in 2013) and the first to launch the messaging in French. The campaign is available to all municipalities. Connect with us at [email protected] for more details on how to spread this important messaging or buy decals for your trucks.

Visit www.staysafestayback.ca to view our video!

A summary of the Ontario Bike Summit written by Yvette Tendick in the Guelph Mercury.

Almonte Councillor Jill McCubbin shares her thoughts on the 2015 Ontario Bike Summit, the Bicycle Friendly Communities designation and why communities should invest in cycling.

“Share the Road is proud to recognize municipalities that are choosing to invest in cycling,” said Jamie Stuckless, Executive Director of Share the Road. “We know from our research that 54% of Ontarians want to cycle more. This is a call to action being answered in bicycle friendly communities. We congratulate them on their progress and look forward to working with staff and community stakeholders to continue building safe, healthy and connected communities.” (read the media release)