The 2014 Ontario Bike Summit has come and gone, and now that we've all had a chance to catch our breath, it's valuable to look back and reflect on the amazing things that happened.

Even before the Summit officially opened, the energy in Toronto around cycling was high. With 2 workshops taking place, one a mobile workshop led by City of Toronto staff and another a Bicycle Friendly Communities workshop, attendees that volunteered part of their Sunday were treated to either a beautiful, instructive ride outlining changes being made to the Waterfront Trail in Toronto or to the shared knowledge of a dozen municipal politicians, staff and local cycling advocates.  It was an incredible way to launch our 6th annual summit, and energized the conversation around cycling even before the summit started.

On Monday morning, the summit got underway with a highly anticipated keynote address from the Honourable Glen Murray, Minister of Transportation and Infrastructure. Minister Murray announced the highly anticipated #CycleOn Action Plan 1.0, which includes the long-awaited announcement of $25 Million in dedicated infrastructure funding for cycling across the province.  The Action Plan features many elements that will make cycling safer and more accesible to all Ontarians, and was the perfect way to set the tone for the rest of the Summit. 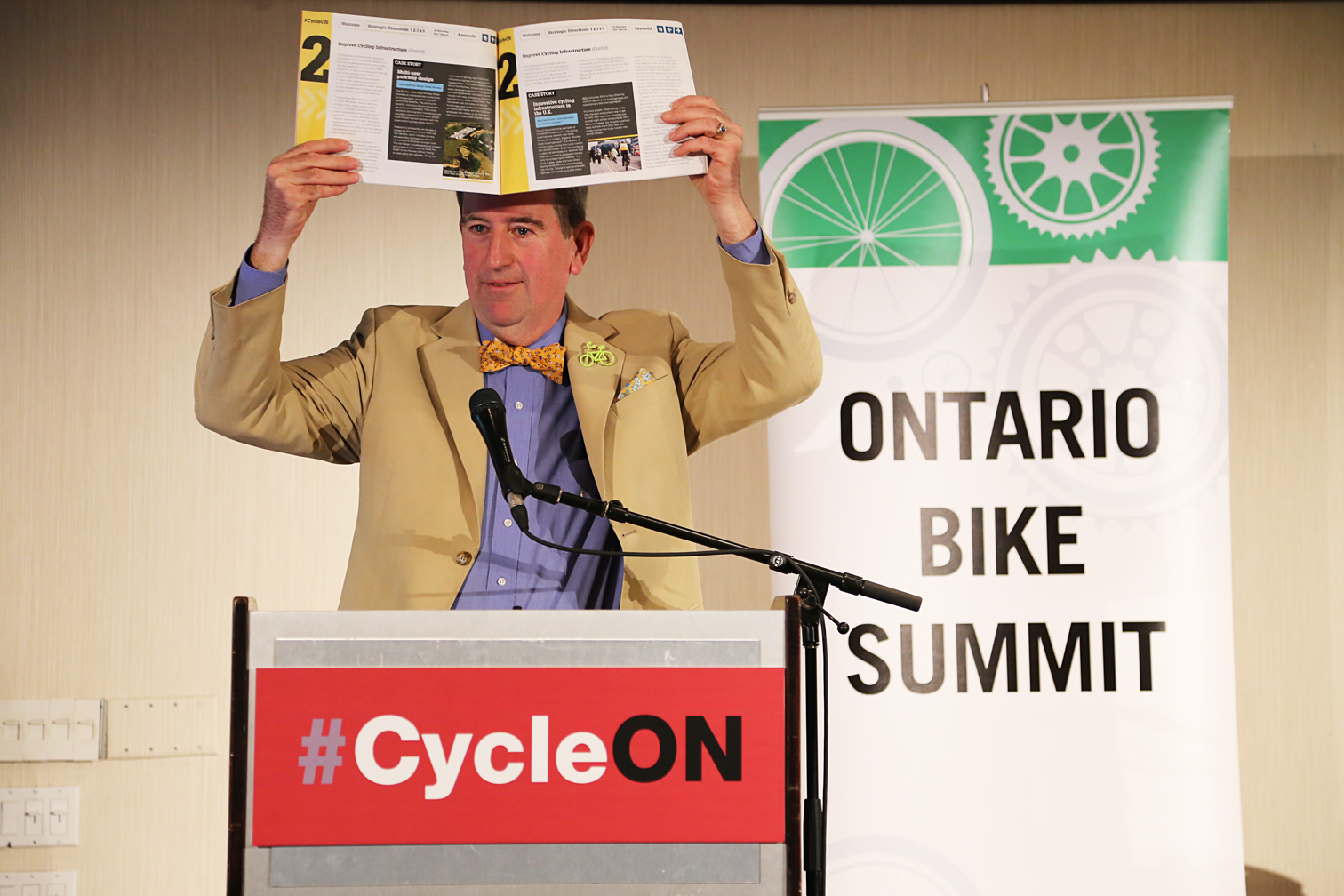 Following Minister Murray's announcement, the Summit was understandably buzzing with excitement. The excitement continued as the Minister was joined onstage by Share the Road's Founder and CEO, Eleanor McMahon, to present a new round of Bicycle Friendly Community award winners.  The BFC Class of 2014 is one that highlights the value of the program for municipalities as they become more Bike Friendly, as all 4 of the awarded municipalities had previously applied to the program, and been recognized at a lower designation level.  Coming in at the Silver award level were Guelph (Previously Bronze in 2012) and Kitchener (Previously Bronze in 2013), with both Halton Hills (Previously Honourable Mention in 2012) and St. Catharine's (Previously Honourable Mention in 2013) joining the ranks of BFCs at the Bronze level. 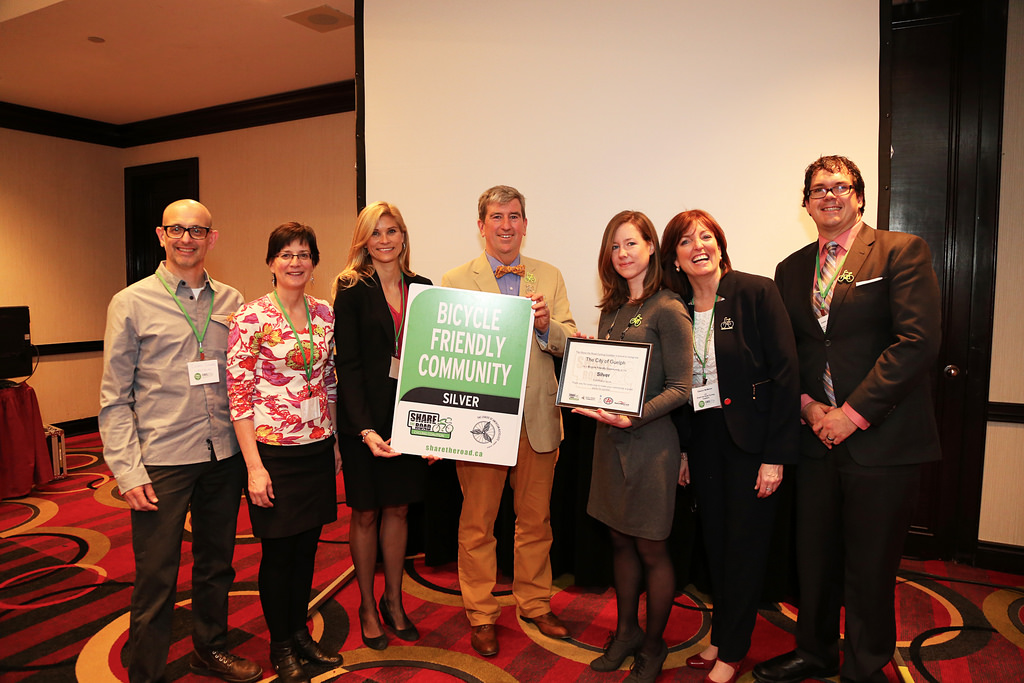 Following the ceremony were the first of our 3 breakout sessions, each offering attendees a choice of 5 incredible topics.  Ranging from tourism potential in rural Ontario to detailed engineering and design workshops, the breakout sessions at this year's summit offered something for everyone, ensuring that all attendees left the summit both informed and inspired.

For our luncheon keynote speaker, Share the Road was incredibly pleased to host Mayor William Peduto from Pittsbugh, Pennsylvania.  Mayor Peduto told attendess the inspirational story of his hometown, and emphasized the resilient nature of cities. "You can bomb a city, you can flood a city, you can rip the economic heart out of a city, but if you invest in that city's people and its infrastructure, the city will adapt, and it will survive," he told attendees, before detailing how Pittsburgh, a City with no grid network, more hills than San Fransisco and many narrow right-of-ways went from being named one of America's worst cycling cities in the 1990s to being the 35th most bicycle-friendly last year, with its sights firmly set on a place in the top 10. "If we can do it in Pittsburgh", he challenged the audience, "there's no reason you can't do it in your community." 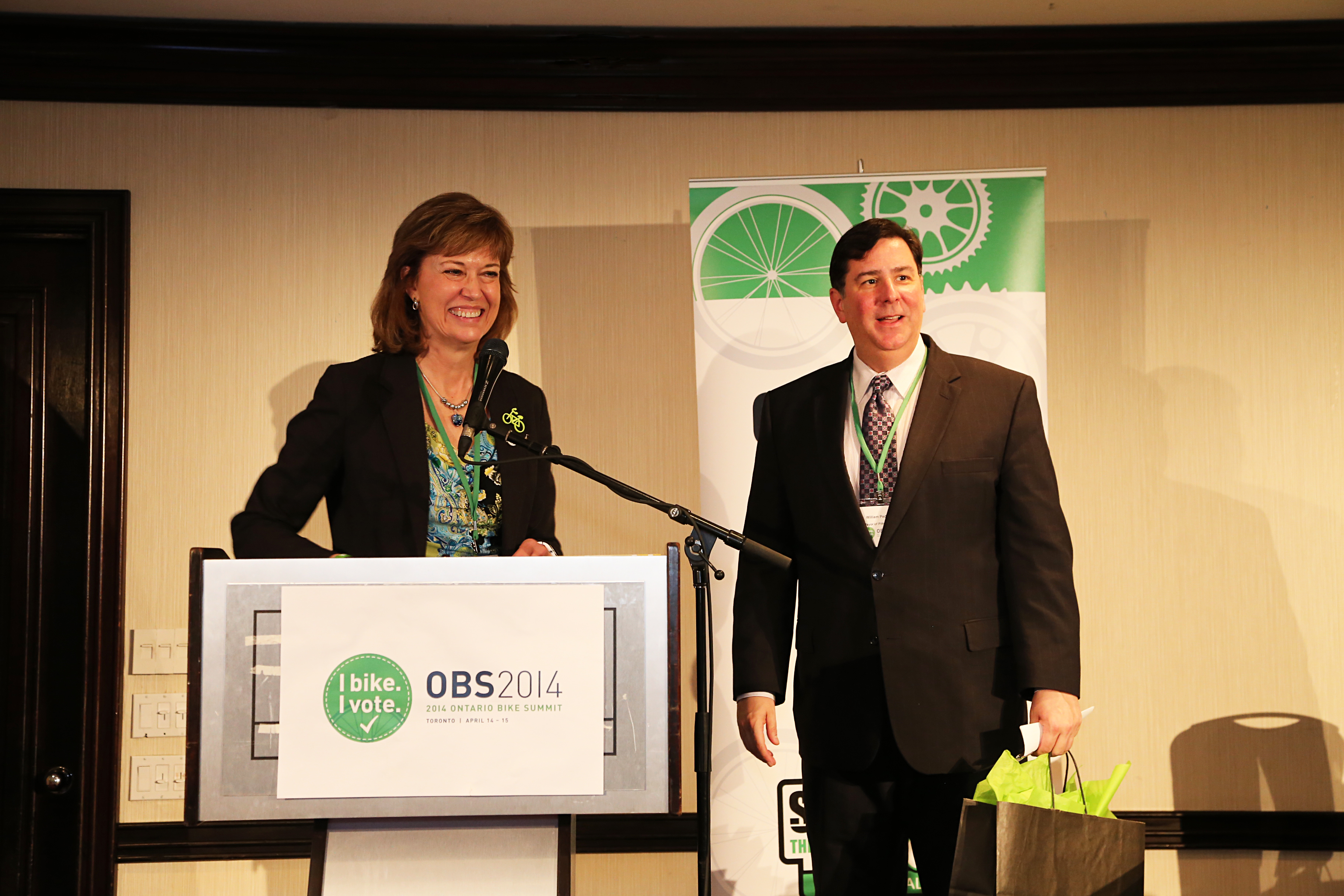 After all the excitement of Day 1 of the summit had concluded, there was really only one thing left to do: Party! With that on their minds, delegates, members of the public and supporters of Cycle Toronto headed down to the Steam Whistle Brewery for the second annual "Celebrate Cycling" Party and fashion show.  There we recognized 2 very special members of the cycling community in Ontario with awards: The Retailer with Heart award was given to Wild Rock Outfitters in Peterborough while the Whells of Change Advocacy award was presented to Alan Medcalf of Brockville. 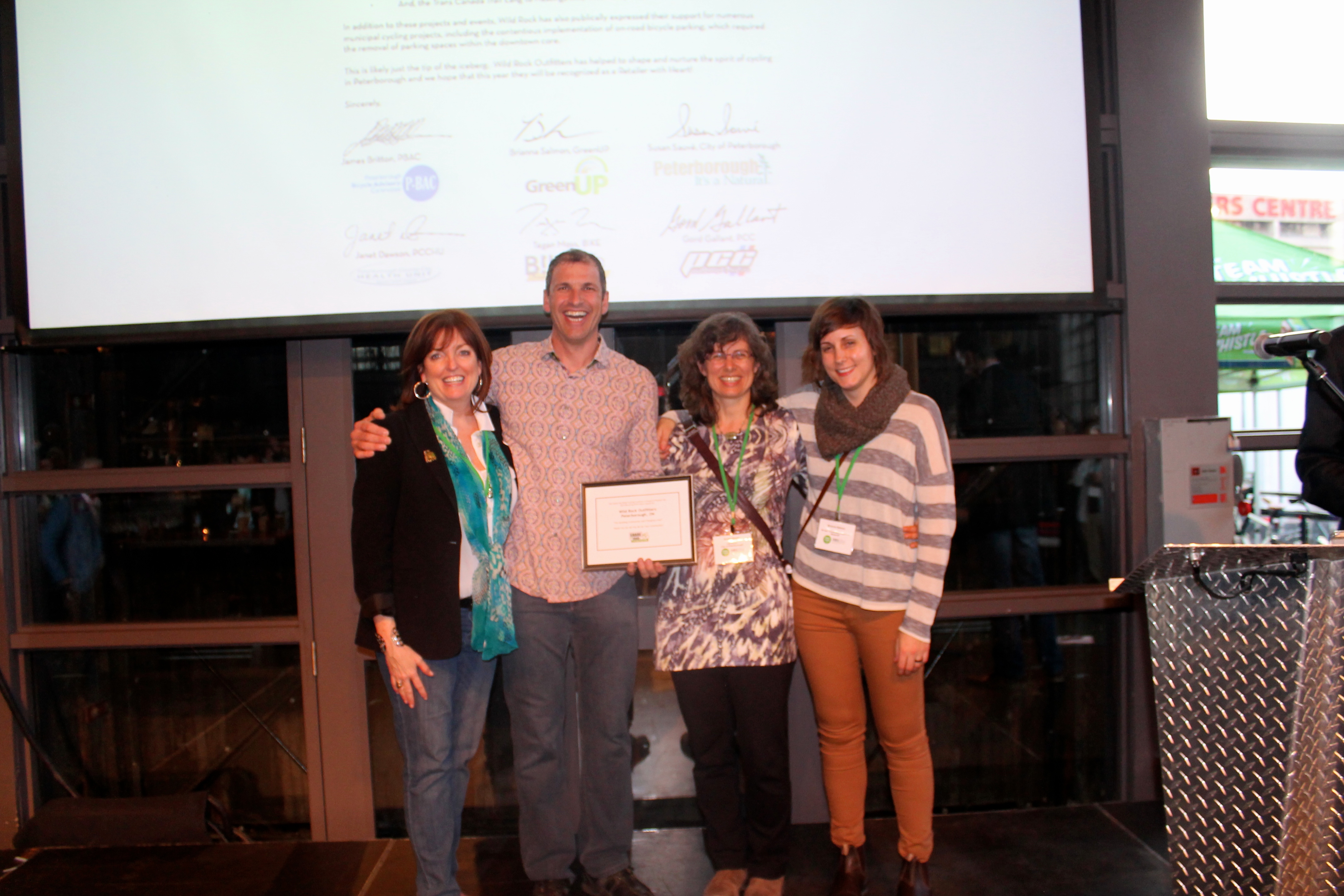 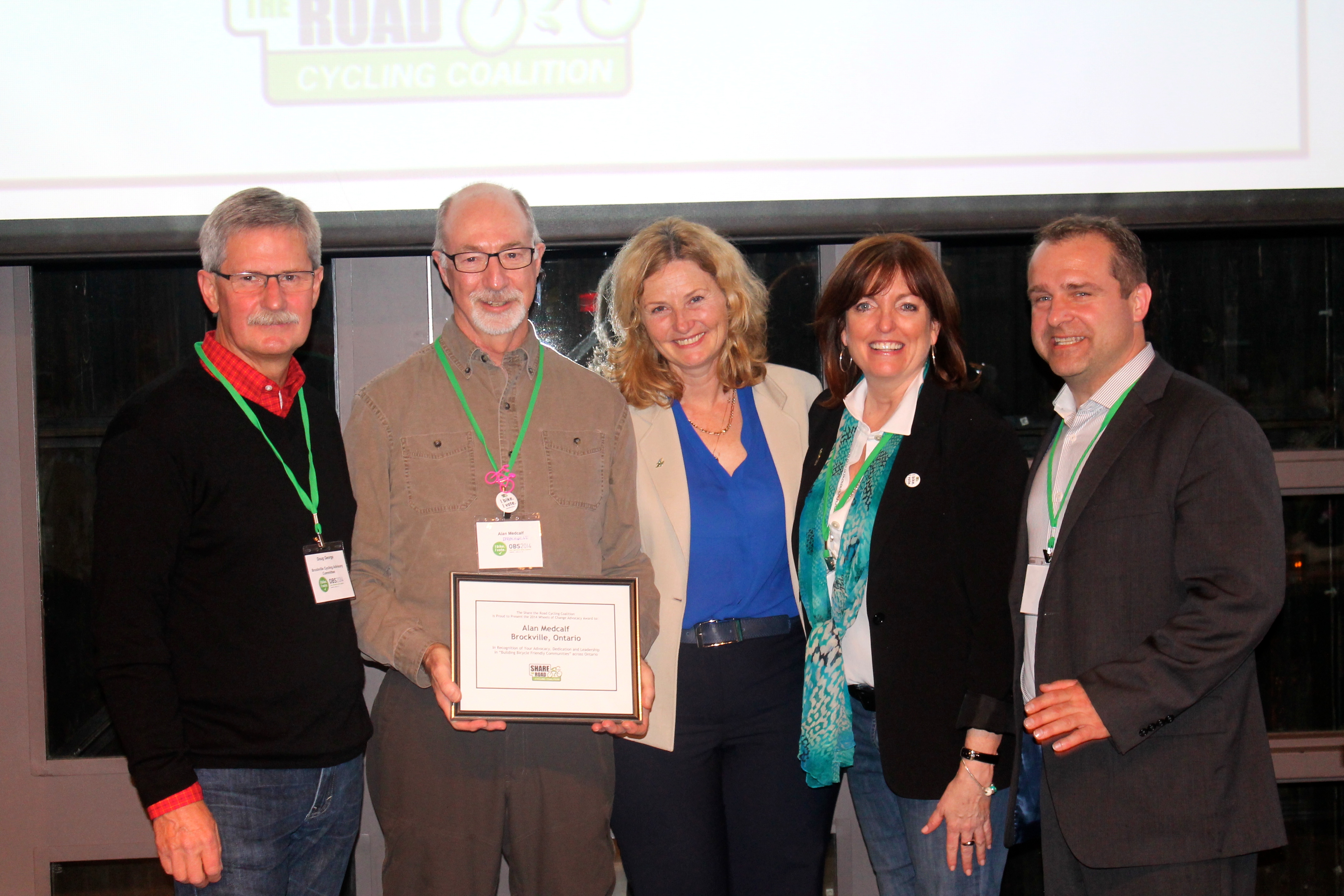 Following the awards, attendees let their hair down and enjoyed an evening of refreshing Steam Whistle Pilsners, great cycle-chic fashions and lively conversation. A fitting end to an exciting first day of the Bike Summit.

Day 2 of the summit featured some incredible plenary panels discussing some of the most important topics facing the cycling movement today. We heard from Scott Kubley of Alta Bike Share about the impacts and benefits of a bike share system to a community. We heard about winter cycling best practices from Montreal and Chicago, and we saw a panel address how cycling advocates need to do a better job of "selling" the benefits of cycling to those who might not be convinced.  We were also pleased to welcome MPPs Mike Colle and Cheri Dinovo, along with the leader of the Green Party of Ontario, Mike Schreiner, to our always lively political panel.  Moderated by Councillor Diane Freeman (Waterloo), the panel revealed once again that all parties support growing cycling in Ontario, even if they sometimes disagree on how it should be done. 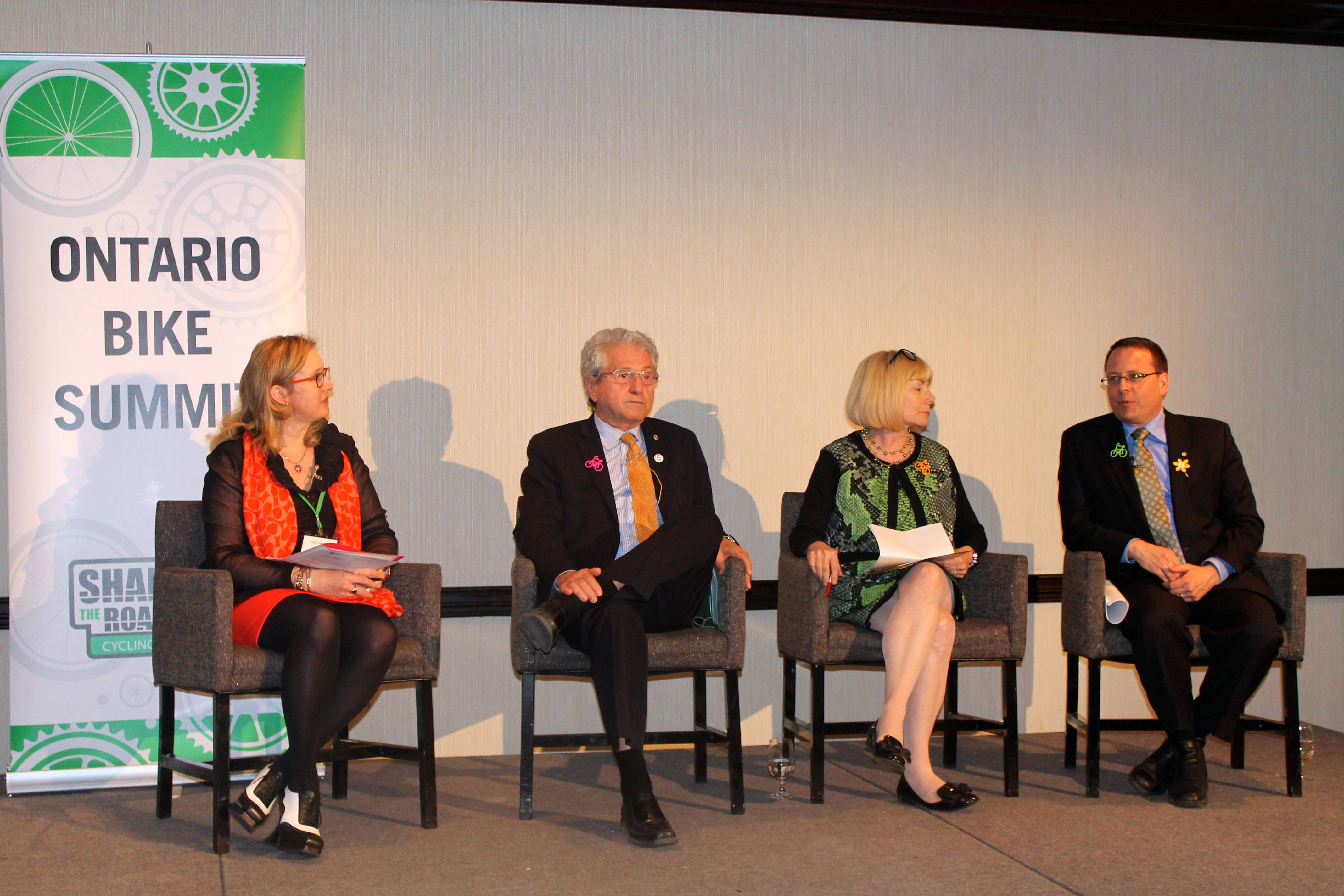 The Political Panel provided a very fitting segue to our MPP reception at Queen's Park, where more than 30 MPPs from all political parties joined Summit delegates to discuss the importance of Cycling in Ontario.  At the reception, Councillor Jane Fogal from Halton Hills was recognized for her exemplary work in her community to advance the cause of cycling, and Minister Murray was recognized by Share the Road for his continued dedication to improving the conditions for cycling all across Ontario.  The well-attended reception, and the representation from all parties and all areas of the province served to further highlight the way that the conversation about cycling is changing and growing in Ontario. Indeed, OBS 2014 proved that cycling is no longer something that is seen as a "special interest" issue - it is now clearly seen as a "public interest" issue, and that broad acceptance will certainly help grow the number of cyclists on the road.  We look forward to seeing you all at OBS 2015! 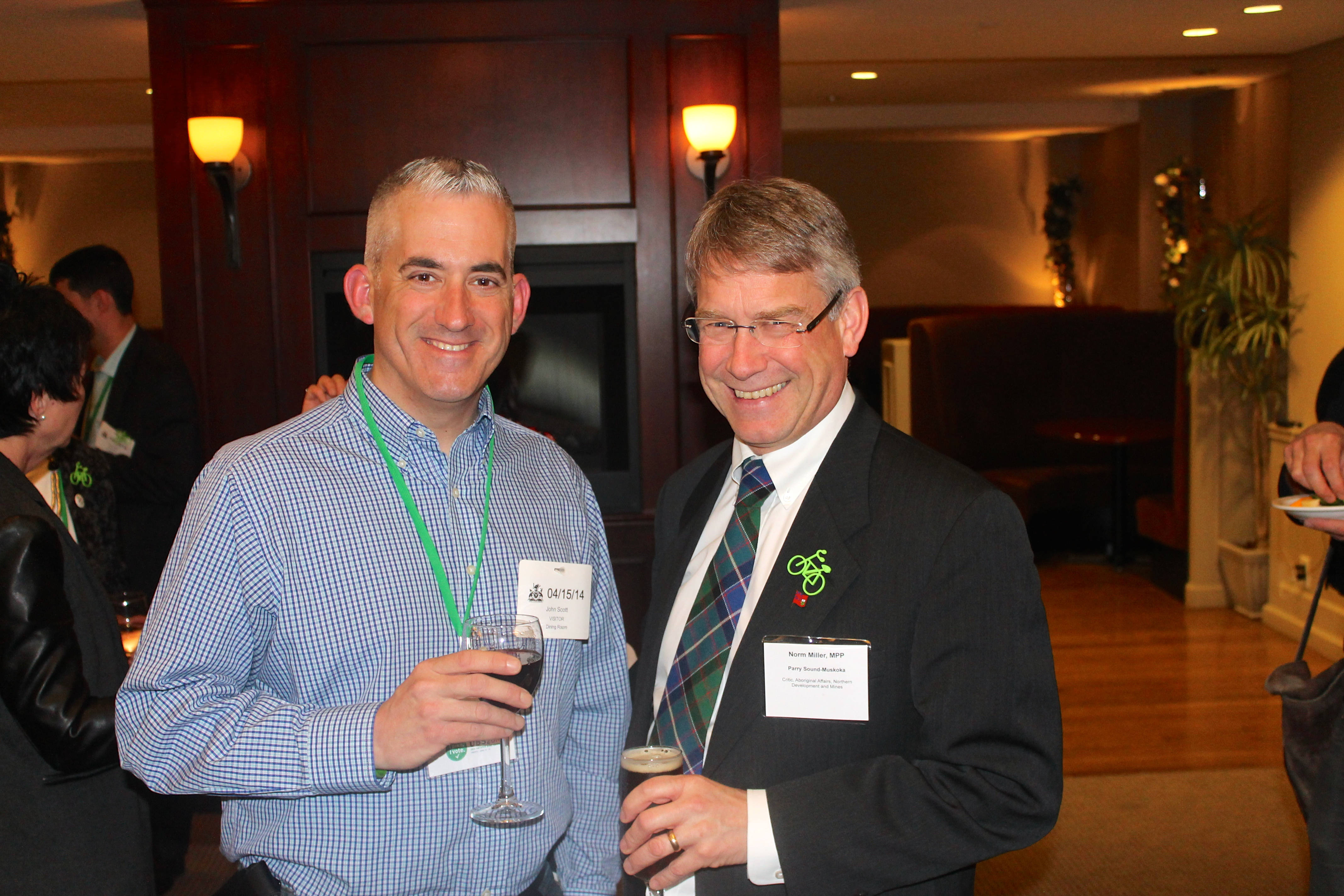 Councillor John Scott (Essex), the Emcee for the 2014 Ontario Bike Summit, enjoys a well-deserved beverage with one of the co-chairs of the all-party Ontario Cycling Caucus, MPP Norm Miller (Conservative, Simcoe Muskoka)