(Institute for Clinical Evaluative Sciences (ICES), 2007) - Neighbourhood Environments and Resources for Health Living - A Focus on Diabetes in Toronto

“…every single bike lane is a fight right now, as is every pedestrianization initiative and almost every shift towards public transit. We are told we need to prioritize, pick the one or two projects that matter most, and then justify those to everyone with a car and a (mistaken) belief that businesses benefit more from vehicular traffic than that which arrives on foot.”

(McKeown, 2007) - Air Pollution Burden of Illness from Traffic in Toronto - Problems and Solutions 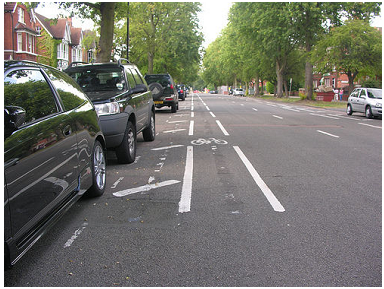 Door Zones
According to the City's Toronto Bicycle/Motor-Vehicle Collision Study (2003): "in the central area of the city, the most frequent type of collision [between bicycles and motor vehicles] involved a motorist opening their door and striking a cyclist."

Bike Boxes
Bike boxes are marked spaces at intersections that indicate dedicated areas where cyclists can wait when stopped at an intersection (for an example, see the illustration below). Bike boxes can serve a variety of purposes. They can facilitate left hand turns and improve the visibility of cyclists.
Bike boxes could also be used to facilitate “two-point left turns” or “indirect left turns” as in the example pictured below. 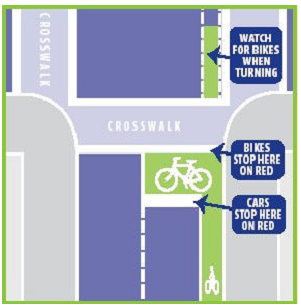 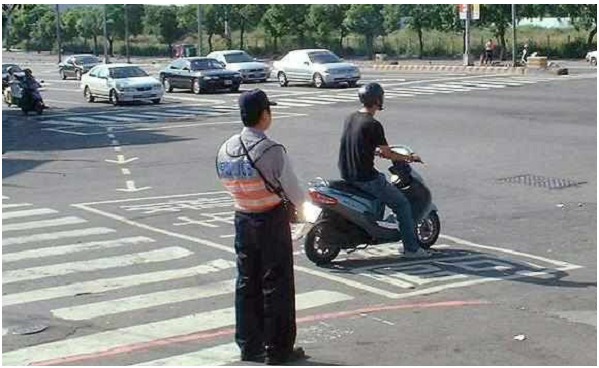 Markings through Intersections
Increases cyclist visibility, creates more space for them on the road and through intersections 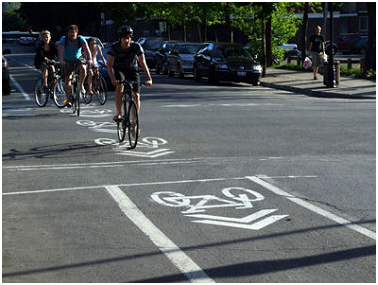 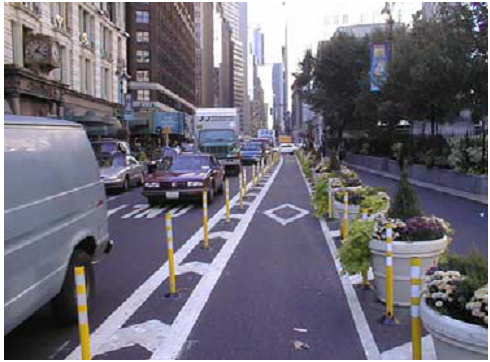 Data on walking and cycling in Toronto is severely limited by the Transportation Tomorrow Survey’s exclusion of walking trips other than to work or to school.